History of the Nordic Rheology Society

The Swedish Society of Rheology was founded in 1956, as part of the Swedish National Committee for Mechanics (Reologisektionen inom Svenska Nationalkommittén för Mekanik) . Erik Forslind was elected as the first president, Hilding Faxén as vice-president and Josef Kubát as secretary. The society had 70 members and held one meeting every second year. Guest speakers at this time were e.g. the well-known rheologists Marcus Reiner and George Scott Blair. 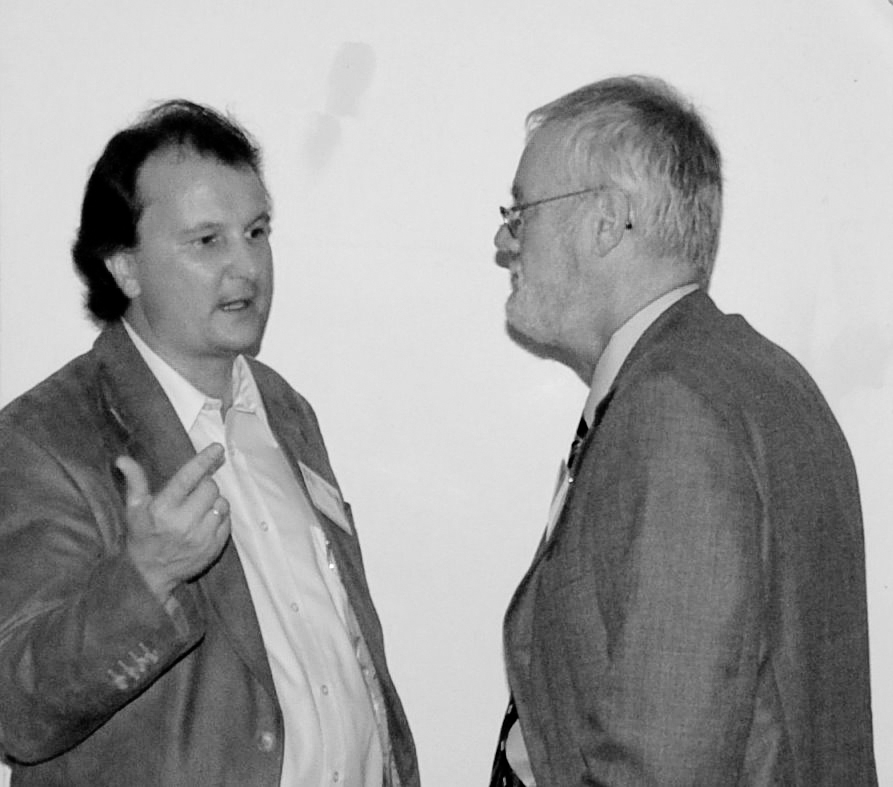 The officers until the end of the 60ies were Hilding Faxén, Erik Forslind, Folke Odqvist and Josef Kubát, and the society became a full member of the International Committee on Rheology (ICR) in 1969. The president at this time was Josef Kubát and secretary Jan-Fredrik Jansson. The society grew but had one problem, it was still a part of Svenska Nationalkommittén för Mekanik, and could not act as an independent society.

The interest for rheology as a science grew and Josef Kubát was then head of the department for Polymeric Materials at Chalmers University of Technology. His international contacts lead to the organisation of the VIIth International Congress on Rheology in Gothenburg 1976. At this time the society tried its first Nordic cooperation. The organizing committee for the ICR consisted of Anders Björkman, Denmark, Johan J. Lindberg, Finland and Norman Bergen, Norway. The congress was a success with over 500 participants with a total of 243 presentations including 29 invited papers, arranged in six parallel sessions.

The society arranged almost one meeting every second year from 1974. Josef Kubát was president until 1983. A period with a number of courses and seminars followed, mainly thanks to Leif Bohlin, who was secretary of the society during the period of 1983-1991.

The society had no by-laws until 1984, and this event actually marked the end of the affiliation to Svenska Nationalkommittén för Mekanik. The Swedish Society of Rheology became an independent society, but still the name remained Reologisektionen in Swedish. The discussions of a Nordic cooperation had been on-going since the 70ies and finally in 1991 the plans of a Nordic society became a reality at the annual meeting in Gothenburg. The name Swedish Society of Rheology was changed to Nordic Rheology Society (in Swedish Reologisektionen was replaced by Nordiska Reologisällskapet). The by-laws were changed, and by this arrangement the society could remain as a full member of the ICR.

Development of a Nordic Society

An interim board was elected at the 1991 annual meeting with the aim of forming a Nordic Society. This first board consisted of Carl Klason (president), Mats Stading (secretary), Johan Becker (treasurer), Josef Kubát (ICR Representative), Mikael Rigdahl (Sweden), Ole Kramer (Denmark), Arnljot Elgsäter (Norway) and Olafur Wallevik (Iceland). There was at that time no Finish representative.

The early days of NRS

After the election of the interim board in the spring of 1991, the board called for the first Annual Meeting of the NRS to be held in Trondheim on June 24 the following year. The Society then had 89 members of which 67 were Swedish, 10 Norwegian, 8 Danish, 3 Finnish and 1 Icelandic. At the annual meeting the charter was approved and practical issues such as stationary, logotype and planning for the next scientific meeting in combination with the annual meeting was initiated. The issue of the stationary was important since much of the correspondence at that time was sent as regular mail and few of the members, and only part of the board, had e-mail accounts. It was also decided that the official language of the Society should be English. It can be noted that discussions with the organisers of the Nordic Polymer Days to arrange joint meetings was started already the first year of the NRS. The first board consisted of Carl Klason (chairman), Johan Becker (treasurer), Josef Kubát (ICR Representative), Mats Stading (secretary), Arnljot Elgsæter, Eeva-Leena Heino, Søren Hvidt, Ole Kramer, Mikael Rigdahl.

The Nordic Rheology Conference (NRC) of 1993 was first planned to be held in connection with the Nordic Polymer Days (NPD) in Stockholm, but due to practical issues it was instead held in Göteborg in August. The Annual Transactions of the NRS was established with Arild Saasen as its editor. In 1993 only the French Society, the GFR, published Annual Transactions. The NRS Rheology Awards were also established and the first award was given to Professor Leif Bohlin for his contributions to experimental rheology in the Nordic countries.

The next NRC was held in København in June 1994. The special topic was Food Rheology and the meeting was held in connection with the NPD. Ten persons participated in both meetings and the NPD organisers were not entirely happy with the arrangements since all rheology related presentations were given at the NRC. The NRC was still a success and attracted as many as 110 participants. The same year Ole Kramer took over as the president of the NRS after Carl Klason.

Establishment of the NRS

In 1995 the use of e-mail had spread as much as the NRS board arranged its first cyber meeting, by e-mail. Mats Stading took new possibilities further and suggested an electronic forum, a listserv mailing list. The board initiated an update of the charter for the Society to e.g. separate the election committee from the board and to secure that meetings could always be called. The travel grants were initiated and announced in the NRS Newsletter. The following year the Annual Meeting discussed whether to join the European Society of Rheology (ESR) and gave the board the mandate to evaluate the ESR and take the decision. The NRS joined the ESR later the same year. In 1997 the first web page of NRS was opened on the SIK server in Göteborg. The same year the present logotype was established from a proposal of the designer Sofia Wallner who was contracted by the NRS board. It is an artist’s view of flow of complex fluids and was well received by the NRS members. The same year the unexpected death of Carl Klason led the NRS to rename its senior award to the “Carl Klason Rheology Award”. It tragically also left the NRS without international representation and the president took over the responsibilities.

In 1998 a bid for NRS to arrange the Annual European Rheology Conference (AERC) in 2002 was prepared. Olafur Wallevik led the preparations with the goal of arranging a conference in Reykjavik. The bid was unfortunately turned down by the ESR in favor of a bid from Erlangen, Germany. The NRC was this year arranged in Lund with Gunlög Tånge as chairman and attracted the record high attendance of 119 participants. In 2002 an award for best presentation at the NRC was introduced. Preparations were also initiated to involve a new part of Scandinavia in the NRS by locating a NRC to the Faroe Islands. The NRC 2003 was indeed held in Tórshavn despite difficult circumstances in the form of a general strike and closed conference facilities. The organizers flexibly moved the venue to the Faroese national TV’s largest studio and the conference dinner was adjusted due to the limited access of some food products. The return from the Faroe Islands was also delayed a day due to intense fog at the airport further adding flavor to the memorable NRC 2003.

The discussions on NRS to arrange the AERC were again taken up after the president of the ESR reminded the NRS of the possibility to place a bid and that a bid from NRS would be welcome. The discussions ended in a letter of interest to the ESR for arranging the AERC in 2009 with the initial aim of having it in Reykjavik. Niall Young took over as president of the NRS after Peter Szabo.

In 2005 the board initiated a revival of the NRS activities with a new newsletter, increased contacts with industry, a new web page and a clearly stated vision and mission. In 2006 the possibility of the NRS hosting the AERC was further discussed. Since the British Society of Rheology was also interested in hosting the AERC, discussions were initiated and a bid for hosting the AERC 2010 was formulated and submitted to the ESR for a decision at its meeting in Naples 2007. The initially intended venue of Reykjavik was changed to Göteborg due to the heavy work load of the local organizer Olafur Wallevik in Reykjavik.

The annual Nordic Polymer Days was still held approximately at the same time as the NRCs. Since the NPD contains a fair amount of polymer rheology discussions were intensified during 2006-2009 to again try to co-organize the two conferences. However, the NRS members did not see a substantial advantage of this and the informal structure of the NPD made a co-organization of the conferences difficult.

At the AERC in Naples 2007 the NRS bid to arrange the AERC 2010 was unanimously approved by the ESR committee which started the activities for the arrangements with Mats Stading and Mikael Rigdahl as chairmen. In 2008 Mikael Rigdahl took over as the president after Niall Young. A discussion forum on rheology for the NRS members was started the following year with LinkedIn as the platform and with Ingvild Haug as the moderator. In 2009 Ole Hassager received the prestigious Weissenberg Award as the first Scandinavian thanks to his valuable scientific contributions to rheology. In 2010 Ulf Björkman made a substantial contribution to the accessibility of the NRS Annual Transactions in arranging for scanning and approvals from authors to make them accessible on the NRS web site. Tragically he did never see the fruits of his efforts as he unexpectedly passed away in 2010. 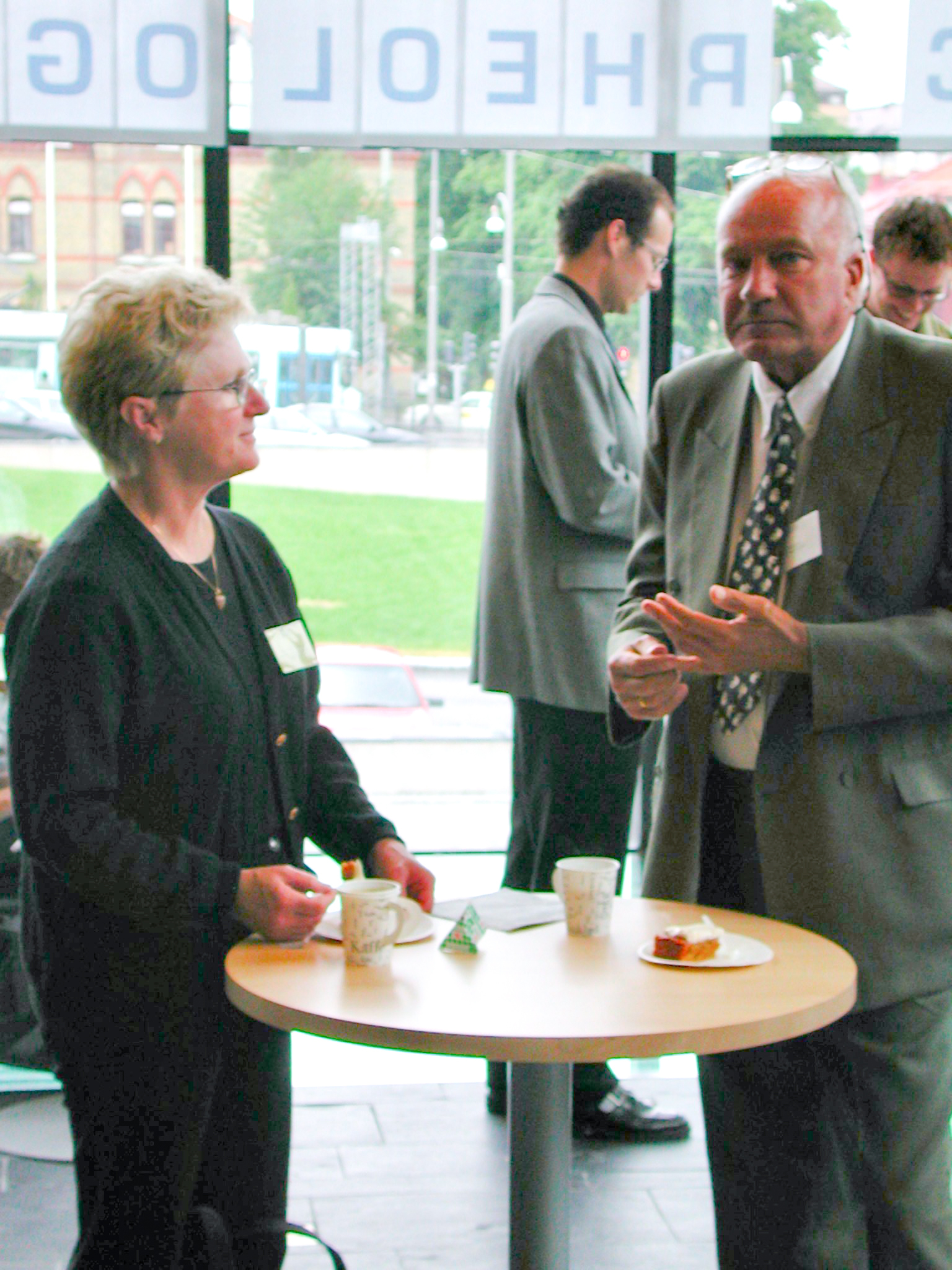 AERC 2010 in Göteborg hosted 430 delegates from 42 countries which was the second largest rheology conference in the Nordic countries only after the ICR (the International Congress on Rheology) in 1976. More participation from Nordic countries would have been expected and only 17 % of the participants came from industry which was far less than usual at NRCs but more than at the AERCs. The general feedback from the participants was positive and the AERC was good marketing for the NRS and the coming NRCs. This was clearly demonstrated at the following NRC 2011 in Helsinki where half of the 100 participants came from outside of the Nordic countries and 17 different nationalities were represented.

Call for nominations: ESR Oldroyd early career award 2023
The Oldroyd early career award is bestowed by the ESR every year to a young prominent rheologist who has distinguished her/himself in research, practice, or service to rheology, regardless of her or his geographical location. The nominee must have completed her/his first terminal degree no more than twelve years prior to the year of the award for which she/he is a candidate.

Nominations should be sent to the Chairman of the Early Career Award (Giovanni Ianniruberto iannirub@unina.it) not later than March 15, 2023. Please do not hesitate to contact the Chairman or the ESR President (mario.minale@unicampania.it) in case you need further information.